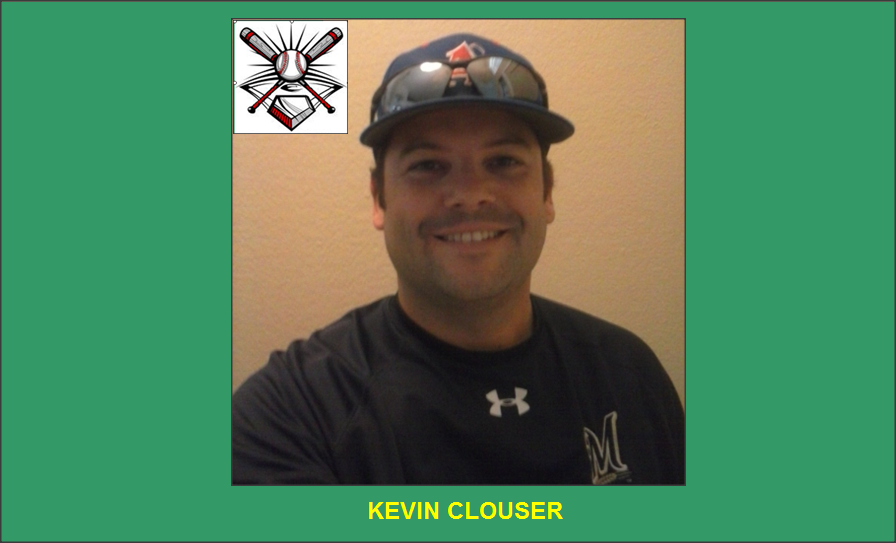 Kevin was born and raised in Lewiston, Idaho.  His father, Bill, was his High School and American Legion coach.  Together, they won two Idaho State Titles in 1992 and 1993.

Kevin attended Kent State University on a baseball scholarship as a catcher.  Immediately following his playing career, he became an assistant coach at his alma mater.  He spent four years in the college ranks, finishing up with an NAIA World Series Title with 16-time National Champions, Lewis-Clark State College in Idaho.

In 2001, Kevin accepted an area scout position with the Pittsburgh Pirates and later moved to Arizona in a similar role with the Milwaukee Brewers.  He spent a total of ten years as an MLB scout, and also served as a minor league coach with the Bradenton Pirates in 2003, and with the Arizona Brewers in 2006-2007.

Along the way, Kevin has worked numerous camps and clinics for Little League Baseball, the YMCA and various other organizations, providing instruction and development for aspiring young ballplayers.

Kevin is currently the Head Baseball Coach at Coronado High School in Scottsdale, AZ.  He is also the owner of Southwest Baseball Consulting, which specializes in baseball development and college placement for elite level high school athletes.

This will be my first summer at Camp Echo Lake.  When I saw this opportunity, it seemed like an obvious fit for me.  The chance to coach baseball in the beautiful Adirondack Mountains is a combination of two of my favorite things.  I see baseball (and all sports) as a vehicle to teach important life lessons to kids of all ages.  I also identify with Camp Echo Lake’s philosophy of human development.

Regardless of the sport or activity, in life, you have to learn to communicate and work with people, support others and be able to be a leader.  You have to be in tune with those around you, and you need to understand how to deal with adversity as well as success.  Baseball is a great way for kids to learn those lessons in a safe environment.  It is my goal to teach these values through baseball.

I am also very excited for my own two children, Morgan and Cooper, to attend the camp for the first time, and experience all that Camp Echo Lake has to offer.  I think that it will be an incredibly enriching experience, and I am excited for them to be a part of it.

What do you do during the rest of the year?

The rest of the year I am involved in various baseball activities all over North America.  I spend a good deal of time in Canada and the Northeast working with elite level high school players, setting up college tours, tournaments and showcase opportunities to assist in moving them onto college baseball.  I sponsor two teams in the Arizona Fall Classic in October, and I run a spring training event for Canadian players in Arizona during March Break.  I am also the Head Baseball Coach at Coronado High School in Scottsdale, AZ.

What is your experience/background with the activity that you oversee?

In addition to playing at the NCAA Division 1 level, I have worked on all sides of the baseball industry for the past 17 years.  I have scouted, coached and administered programs at the youth, high school, college and professional levels.

How do you tailor your lessons to develop campers with varying skill levels?

At any level of baseball, the fundamentals are the same.  To quote Bull Durham (my favorite movie of all-time)…“you throw the ball, you catch the ball and you hit the ball.”  It’s really that simple.  To accommodate the various levels of skill, you adjust the intensity and difficulty level of those basic elements.  I break down each individual movement into repeatable parts, train those parts separately, link the movements back up and then increase the intensity to game speed and beyond depending on each individual’s ability.

For the younger kids, it has to be fun.  Keeping it simple (while still teaching the fundamentals) is the key.  The better a child is able to throw, catch and hit, the more fun he/she is going to have in the sport.

What are your goals for the campers for the summer of 2015?

My goal this summer is to give each child the fundamental skills that they will need to maximize their enjoyment of baseball, and give them the confidence and desire to continue with the sport.  I want every child who steps onto the baseball field to leave camp more excited and confident about baseball than when they first arrived.