This week’s My CEL Journey Monday article comes to us from Zach Zelikovic.  Zach was a camper and staff member at CEL from 1996-2010 and returned in 2013 as our Tour Director.  Zach continues to return to CEL when he can to lead tours for our prospective camp families.  Please enjoy his journey… 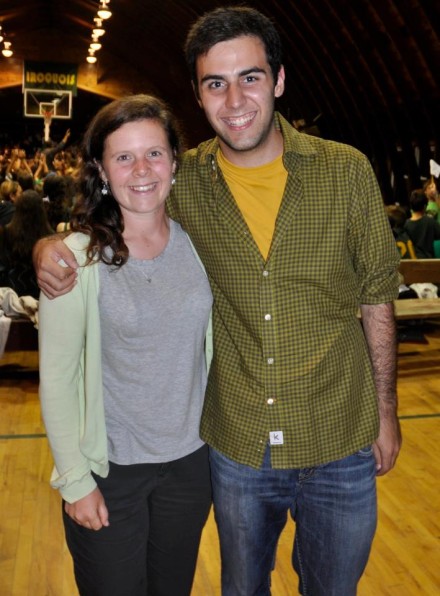 My first memory of Echo Lake dates back to July 1995 when I was 7 years old. In those days Fantasy Camp or S’more camp was 4 days long. I remember getting into a white Camp Echo Lake van on 90th Street and York Avenue in NYC for my first of many drives up to Warrensburg. The van driver was very friendly and knew a lot about camp. All of his stories and his singing over the cassette tape of camp songs were getting me and the other rookie Echo Lakers ready for 4 days of fun. I didn’t realize until I got to camp that the van driver was George Stein, brother of current owner/director Tony Stein! After I returned home from 4 days of Fantasy Camp, my parents have reminded me that my first words off the van were “You can throw out the other camp videotapes! I’m an Echo Laker now!” What I didn’t know then was that the decision to go to Echo Lake was one of the best and most influential decisions of my life.

I started out as a Frosh Boy in 1996. My group leader David Prager welcomed me off the bus, did the standard lice check, and we walked down the bunk line towards Bunk 21 to meet the rest of my group. Even though I had emphatically chosen Echo Lake a year ago, I was very nervous and very shy. A million questions must have been racing through my mind: Who would be my friends? What would the food be like? What if I struck out playing baseball tomorrow? Would I pass my deep test? My counselors always put us at ease. It was this welcoming personalized attention that made your counselors feel like family members. This was consistently true throughout my 9 years as a camper at Echo Lake. I could name all of them today. I could tell you about the amazing bedtime stories they would tell. I could tell you about how during my second summer at camp I started out very homesick, and so during Friday Night Services my counselor Chris Sourada sat me between him and his friend and fellow counselor Laurie Rinke to make sure I had a great experience. Twenty years later, Laurie is still a mentor and a close friend. If you ask me, the staff at Echo Lake are the secret to its success and I thank them the most for almost a decade of memorable summers.

After that first Frosh summer in 1996, I knew I was coming back for more, but I worried: what if not all of my friends came back? This turned out to not be a problem. Not only were all 10 of us back, but there were now 13 other campers in my group! The bonds that you form with your camp friends are unlike any other. Where else do you get to spend 24 hours a day with your friends for 7 weeks each summer? We learned how to swim, build a tent, play lacrosse, climb a wall, sing the Alma Mater, and a thousand other things. When I was 11, we went on our first big trip together to the Baseball Hall of Fame in Cooperstown. Jason Kahn, Stuart Uffner, and our counselor Dan O’Leary made up a song about Cooperstown to help us pass the time on the long bus ride there. That song still echoes in my head! When I was 13, my parents divorced and I had a hard time adjusting. The first person I went to talk to was my longtime camp friend Rob Lupovich. He told me I could always lean on him. My relationship with my camp friends has continued to grow and flourish. We went to each other’s bar mitzvahs, countless sleepovers, trips to California, and more. And now that we’re older we have dinner together often and have celebrated camp weddings too!

My experience as a camper culminated with our 4’n4 trip followed by a summer as a Leader-in-Training. I made more friendships during those years. My LIT summer I was honored to lead the Iroquois team with Ally Begly. We may have lost Tribal War that year, but I made a friend for life. Even though Ally and I live almost 1,000 miles away from each other, we speak often and see each other as much as possible. I’ve even been an honorary member of her family’s Christmas extravaganza! When our LIT summer ended, I knew my Echo Lake experience was not over yet. I could not wait to give back to the community that raised me over the past 9 years.

When I returned to Echo Lake as a cabin specialist for the Upper Inter Boys at age 18 I could not have been happier. I had finished my SATs, successfully gotten into the college of my choice (with thanks to my college essay about Echo Lake!), and had graduated from high school. Little did I know being a counselor at Echo Lake was no easy task. A week long orientation learning how to keep campers safe, how to diffuse situations, and to always be flexible and adaptable seemed like foreign concepts to me. I didn’t know how much the training would help me when dealing with my rambunctious group of 12 year olds! They were crazy… it’s ok that I say that, they knew they were: those campers are now seniors in college and I consider them good friends now. I also didn’t know how much the orientation and on the job training would help me in life. People like head counselor Theo Stoner or group leader Hugh Brodie taught me lessons I wouldn’t learn in college or anywhere else for that matter!

More recently, I have held two jobs at camp that I believe to be my most rewarding yet. In 2009 and 2010 I served as the Director of the Leader-in-Training program. Helping two groups navigate the path from camper to role model was a dream come true. It made me realize how every single person from an 8-year-old Frosh to a 16-year-old LIT to a Kitchen Staff Member to a Cabin Specialist to the Echo Lake matriarch Amy Stein play a role in creating the perfect community to have fun, to learn, and grow. Saying goodbye to my LIT’s on their last days those summers was the hardest thing I ever did at Echo Lake. I was able to console myself by realizing that camp was always there for us no matter how young or how old we were.

These days, I don’t get to spend as much time at camp, but I make every effort I can to be there when I can. When I am there, I am lucky enough to take prospective campers and their families on tours of Echo Lake. I often think to myself on the tours that these little 6 and 7 year olds with their wide eyes and nervous laughs will soon embark on the same journey I did. How lucky they are.