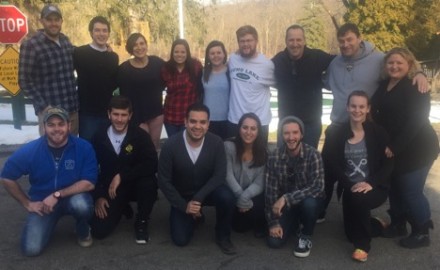 We are beyond thrilled to announce Camp Echo Lake’s 2016 Head Staff! While the wealth of experience and depth of passion in this group is truly unmatched, we know they will push themselves to the limits to raise the bar of excellence at Echo Lake. We wanted to take a minute to proudly introduce to you the outstanding individuals that join Tony, Laurie, Brenda, JP, and Kelly in leading camp to another outstanding summer!

In addition to celebrating Echo Lake’s 71st summer, our Head Staff brings an AMAZING 239 summers of total Echo Lake experience with them! We could not be more excited! In fact, we bleed green and gold…

Juan is enthusiastic to be returning to CEL for his 5th summer after a short hiatus from camp!  Juan is 32-years-old and is from Calgary, Alberta, Canada and currently lives in Toronto, Ontario, Canada.  Juan has worked at camp in prior summers as a member of the Program staff and 4n4 staff.  During the winter, Juan works in the entertainment marketing industry for both film and television. Juan’s favorite memory of camp happened in 2006, when some 4n4 campers and himself decided to be overly enthusiastic about everything Tony was announcing at Line-Up.  This was the beginning of the now famous EXTREME LINE-UP, which takes place once a summer in Senior Village.  During Juan’s spare time he has been known to make short films.  In 2011 he won a $10,000 film making competition from the Calgary Flames.  He refers to it as his little moment of stardom, although most Echo Lakers would consider being the originator of EXTREME LINE-UP as equally as big of deal.

Rob is excited to return for his 5th summer at CEL, and 1st as Inter Boys Head Counselor.  Rob is 26-years-old and grew up in Ft. Lauderdale, Florida where he still currently lives.  Rob is currently completing his Bachelors degree in Psychology and works simultaneously at national professional tennis tournaments as a racket stringer.  Rob’s favorite time of the week at camp is every Friday during Friday Night Live.  He also appreciates a delicious grilled cheese sandwich anytime they are served for lunch. A fun fact about Rob is that he has been skate boarding since he was 5 years old.  He is now excited to be teaching his nieces and nephews his favorite hobby!

Kelly is excited to return to CEL this summer as the Junior Girls Head Counselor.  This will be Kelly’s 10th summer at camp and her 7th as a Girls’ Camp Head Counselor. Kelly is 28-years-old and grew up in Syracuse, NY.  She currently resides in Fayetteville, NC.  In the winter, Kelly works for Camp Echo Lake as the Director of Customer Service.  Kelly looks forward to the summer when she is able to both interact and build relationships with the campers and staff.  Kelly’s favorite time of the week at camp is Friday Night when all of the campers and staff come together for Services and Friday Night Live.  A fun fact about Kelly is that she has a beagle mix, named Benny, who joins her at camp in the summer.  He loves any attention and belly rubs he can get from both campers and staff.

Ally Begly is excited to return to CEL for her 18th summer and 3rd in the position of Girls’ Camp Head Counselor.  Ally grew up in Geneva, NY and spent her summers at camp since she was a baby.  Ally is 27-years-old and currently lives in Madison, Wisconsin where she works as a 1st, 2nd, and 5th grade science teacher.   Ally’s favorite memory of camp happened in 1994 when she was a Frosh Camper.  She recalls that her counselors planned a very elaborate Special Day in which they incorporated all of the colors of the rainbow.  Twenty-one years later, she still remembers it as the coolest thing that happened to her at camp.  A fun fact about Ally is that she loves seltzer water so much, that her and her brother (Corey Begly LIT Director) started the official Adirondack chapter of the Polar Seltzer Club this past year.

Corey will be returning to CEL this summer for his 20th summer!!! Corey was a camper at camp and has had many different roles on camp as a staff member including Cabin Specialist, Group Leader, 4n4 Staff, and Basketball Activity Specialist.  This will be Corey’s 3rd summer as the LIT Director.  Corey is 25-years-old and from Geneva, NY.  He currently lives in Bath, ME where is a high school history teacher and Varsity basketball coach at Hyde School.  His favorite memory from camp took place in 1994, when him and his father (Glenn Begly- Basketball Head Specialist and Camp Ombudsman) popped out of a cake and threw papers in the air for a fake Tribal break!

Cal was born a “Yooper” from the upper peninsula of Michigan and grew up just south of there in Traverse City, Michigan.  Cal has lived many places since, but has recently returned to Traverse City for good.  Cal is 26-years-old and this will be his 5th summer at camp, spending his last 4 summers as a 4n4 counselor, most currently as the Trip Leader. Cal is excited for his first summer as Senior Village Boys Head Counselor and to get to experience all 7 weeks on camp!  Cal currently teaches high school math at a boarding school close to his town. Cal enjoys spending the 4th of July at camp and loves viewing the fireworks show every summer. Cal is always developing new hobbies, and recently started doing some wood carving and leather working.

Casey is excited to be back at CEL for her 10th summer, and 1st as the Senior Village Girls Head Counselor.  Casey is from Rye Brooke, NY and spent 5 summers at CEL as a camper before becoming a staff member.  Casey is 21-years-old and currently lives in Newark, DE where she is a senior at the University of Delaware.  Casey’s favorite camp activity is stand-up paddle boarding yoga.  This is when you do yoga on paddle boards in the middle of the lake.  How cool!  A fun fact about Casey is that she was once in a Broadway play!

P.J. is excited to be returning to CEL for his 2nd summer, and his 1st in the position of Program Director.  P.J. is 45-years-old and brings with him a wealth of knowledge and experience.  P.J. grew up in Cambridge, NY (a small farming town between NY and VT) and currently lives in Glens Falls, NY.  P.J. currently owns and runs his own soccer academy and is in the midst of creating his own leadership organization.  Prior to this, P.J. worked for a number of years as a public school teacher.  Previously running our soccer program in summer 2015, it is only fitting that P.J.’s favorite camp memory is World Cup Soccer Day.  A fun fact about P.J. is that his favorite coffee comes from Starbucks.  You can often find him enjoying a Peppermint Mocha during the holiday season!

Logan is excited to return to CEL for his 8th summer, and 1st as Assistant Program Director.  Logan is 24-years-old and from Vero Beach, FL.  Logan was a camper at CEL as a child.  He currently lives in Boston, Massachusetts where he works as as a residential counselor for kids with with autism spectrum disorders, acquired brain injuries, neurological diseases and disorders, dual diagnosis or severe challenging behaviors.  Logan’s favorite camp event is Apache Relay (the gigantic relay race that takes place on camp in conjunction with Tribal).  A fun fact about Logan is that he is currently learning how to roast his own coffee beans!

Jayme is excited to return to CEL for her 2nd summer, and 1st as Girls’ Camp Program Coordinator.  Jayme grew up in Grafton, Massachusetts and currently lives in Norman, Oklahoma where she is studying for her Masters in Adult and Higher Education with a concentration in Athletic Administration.  Jayme is 24-years-old, and currently has many roles at the University of Oklahoma.  Not only is Jayme a full time graduate student, but she works as an intern in the Athletics Department Compliance office, and in the Graduate Life office.  Jayme’s favorite camp memory is when Tribal broke last summer, when she was a Group Leader.  She fondly remembers the joy it brought to her campers.  A fun fact about Jayme is that she knows American Sign Language.

Grant Stafford is excited to be returning to CEL for his 2nd summer, and his 1st as Boys’ Camp Program Coordinator.  Grant is 24-years-old.  He grew up in Fairport, NY and currently lives in Huntington, WV.  Grant currently works as a Ticket Office Assistant at Marshall University Athletics Department.  Grant’s favorite memory from camp last summer is the lasting relationships he made with both campers and staff, along with the many exciting events he got to partake in.  An exciting fact about Grant is that he traveled from the East Coast to the West Coast, and from Florida and back, twice, within the last two years.

Mark (A.K.A Kroney) is excited to return to CEL for his 17th summer, and first as Senior Village Program Coordinator.  Mark is 26-years-old and from Ardsley, NY.  Mark grew up at CEL as a camper. He has since returned for many summers on staff in various positions including LIT Co-Director and Activities Head Specialist.  During the winter, Mark is a P.E. teacher at an elementary school in the Bronx, where he works with pre-K through 5th grade students.  He is also currently studying for his Masters in Special Education at the College of New Rochelle.  Mark’s favorite camp event is Apache Relay (the gigantic relay race that takes place on camp in conjunction with Tribal).  An interesting fact about Mark is that he was recently, and successfully, hypnotized to stop biting his nails.

Nick (A.K.A. Stew) is excited to be back for his 4th year in the role of Program Ops at camp. This will be Nick’s 16th summer at Echo Lake and he is really looking forward to working closely with the Program team and JP on off camp trips, intercamp activities, and all the many details that keep program and operations running! Nick is 38-years-old.  He grew up in New Orleans and now lives in Hammond, Louisiana with his wife Tara, their LVB son Ethan, and their five-year-old daughter Sophia! Nick is currently a school counselor at St. Thomas Aquinas High School. His favorite camp event is Off Track Betting. A fun fact about Nick, is that he is a member of the all male dance charity group called 610 Stompers (www.610stompers.com).