This week’s My Camp Echo Lake Journey article comes to us from Stacey Becker Wanicur.  Stacey’s journey at CEL ranges from 1988-1997.  She was both a camper and staff and has many fond memories of her time and the people who were a part of her experience at CEL.  Please enjoy her journey below… 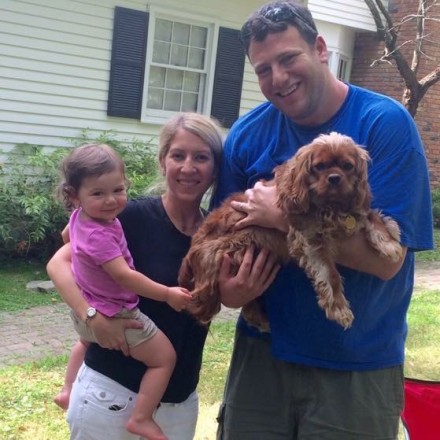 Stacey is pictured here with her husband Jonathan (also a CEL alumni) and daughter Ellie.

After a bad experience at another sleep-away camp, a family friend recommended that I try this wonderful, warm, down-to-earth place where they don’t let you bring hairdryers or wear make-up. It sounded perfect. I started at Camp Echo Lake back in 1988 as an Upper Junior Girl with feathered bangs, braces and a ton of Kirk Cameron posters. I didn’t know a single person at camp, except for my Big Sister, Hallie Grossman who had been assigned to me and wrote me wonderful letters assuring me that I’d be ok.

When I look back at camp, I describe it as the kind of place you can meet a person sitting next to you at breakfast and then be best friends by dinner. That first morning after the buses dropped us off, I remember walking into my bunk and meeting a blonde girl from New York City whose bed was next to mine. It was Barrie Koegel. At 11 years old and being from Rockland County, NY, I didn’t even know where SoHo was, but that’s where Barrie was from. She instantly became one of my best friends – she was an incredible athlete and loved playing sports just as much as me. She also taught me how to play Rummy 500 and we kept a running tally with scoresheets for the next 4 summers. Cheryl Kramer was our Group Leader that summer and Lauren Ostrin was our cabin specialist along with Helen Risdon, one of my favorite Brits of all time. Other Upper Junior Girls and lifelong friends that I met that summer – Deb Cederbaum, Nicole Berkowitz, Shara Perlman, Erica Medine and Lauren Rothman. I had no idea that although I had arrived alone that summer, I had just hit the jackpot in terms of friendship.

That first year at camp laid the foundation for some of the best summers of my life. I was a camper for 5 years (Junior, 2 years as an Inter, Middle Village and then 4 n’ 4), a CIT in 1994 and then spent 2 years as staff. I was a tennis specialist in 1995 and a Group Leader for the Middle Village Girls in 1997. There were a ton of memories, but my favorites by far were the following:

My Camp Echo Lake memories and deep rooted love for this special place, continue with me to this day. I married a former camp friend of mine – Jonathan Wanicur. We had always remained friends and met up at a Project Morry fundraiser after we were both going through recent break ups. I had always had a crush on him and finally got my chance. Jonathan proposed to me on the back porch of the Senior Village Lodge (thanks to some helpful coordination by Tony Stein) on July 4, 2009 and we were married on March 13, 2010. We now have a toddler daughter, Ellie Lila Wanicur, who turned 2 in March.

In addition to Jonathan, my choice of Emory led me to maintain my Echo Lake connections and make news one. I joined Delta Phi Epsilon, where Echo Lake Director, Laurie Rinke, was my New Member Educator. It is no wonder that my freshman pledge experience at Emory was one of my best college experiences yet – I was being led by a complete pro. Laurie now shares my love of The Bachelor, and has befriended my daughter, Ellie, instantly. Corey Frimmer was my “senior mom” at Emory. Other sorority Echo Lakers – Jessica Brodsky and Hillary Poris (who was my CEL Little Sister). Adam Pittsburg was another CEL / Emory crossover – along with Larry Gould.

What I have always loved best about Echo Lake, is the lifelong community that I’ve become a part of over the years. It doesn’t matter if you were sort of friends, never spoke a word, or haven’t seen each other in years. If you run into an Echo Laker, you are instant family. Julie Rappaport and I never spoke a word to each other at camp. We live a few blocks away from each other and became close friends as soon as our babies were born. Now those babies will be attending nursery school together next fall in the same class. Bethany Eppner and Alice Birnbaum have guided us through the insane nursery school process.

Through Jonathan, I get to stay in touch with some other wonderful Echo Lake legends – John Saroff, David Prager, Michael Bogner, Dan Meyer and Andy Finkelstein. I owe so much to Echo Lake – so many of the friends that I have, and the experiences there have shaped who I am today. The Group Sing / Tribal Sing songs that I still know every word to – have provided great material to sing to my daughter.

My recently published book, Knot the One, has a great deal of camp life included in it. You can check it out here and learn more about the story of how Jonathan and I got together: http://www.amazon.com/Knot-One-Getting-Wedding-Happened-ebook/dp/B0153OI1W6

If you want to check in with the Wanicur family – find me on Instagram (@OfficeStace) or check out my blog http://OfficeStace.com