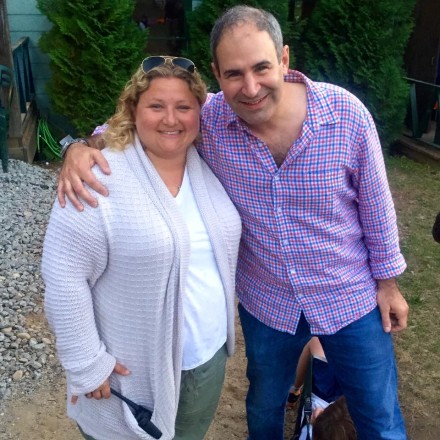 Seth is pictured here with our very own director, Laurie Rinke, during his visit back to camp last summer.

This week’s My Camp Echo Lake Journey Monday article comes to us from Seth Kalvert.  Seth is a former camper and counselor at CEL.  His camp journey ranged from 1980-1993 and well, is continuing on now, as a parent of two first year campers, Owen and Sasha.  Please enjoy his story…

During the fall of 1979, when I was in fifth grade and after a couple of years of bugging them about it, my parents agreed to send me to sleepaway camp for the following summer.  Thorough researchers, they canvassed their friends and colleagues for recommendations and came up with a short-list of prospects.  And so, every week for about two months, no fewer than a dozen camp directors made the journey to our house in New City, NY, unpacked their slide carousels and screens (am I dating myself yet?) and made hour-long presentations about their camps, all of which started to blur with pine trees, blue skies, lakes and tennis instruction.  The last owner/director who visited was Morry Stein – five minutes into our conversation, I knew there was no need to meet any others.

Morry was warm, generous and personable.  He immediately connected with me, not just my parents as all the other directors had done, and was interested in hearing about what I was looking forward to about camp.  He spoke less about the physical aspects of Echo Lake and more about its community and the way it offered something for everyone.  Mostly, Morry was passionate about camping; he was genuine and down to earth.  We signed up that night.

That decision brought me to Echo Lake, one of the deepest and most positive influences on my life.  I spent twelve summers at the Lake from 1980 – 1993, taking off a couple of summers along the way.  I was a camper in Main Village (including what’s now known as the Frosh Lodge), the old Senior Village (now known as Alumni Village) and the current Senior Village that first summer when it converted from Indian Head.  I’ve been a Cabin Specialist, Group Leader and 4N4 Leader and spent a partial summer as CIT Director.  I was a counselor for the Echo Lake Idea.  Thinking about it now, I may be the only person who was Tony’s camper (twice, actually, 1981 Upper Inter C Boys and 1983 Upper Senior A boys) and Laurie’s counselor (1991 4N4).

Over the years, Echo Lake has enriched my life in so many ways.  The biggest has to be the friends I made, many of which continue to this day.  Coming back year after year, we literally grew up together.  And as we got older, we’d often see each other during the winter, at bar/bat mitzvahs, sweet 16’s and just weekends to hang out.  These friendships were so important to me because of the intense way we all knew each other, living together for two months away from home.  I knew that regardless of how things changed during the year, camp was always a constant.

My counselors were another huge influence.  They were funny, totally involved, and set us up to have awesome summers.  We all learned so much from them.

Camp gave me so many other outlets over the years.  I got to live out hoop dreams at Sachem Basketball, develop leadership skills as CIT and Chieftain (go Mohawk!) and indulge my creative side, acting (poorly) in a bunch of plays and writing a number of tribal sings and group songs (some pretty good, some not so much).  I got early responsibility the summer after I graduated college, leading 24 campers across the country on 4N4, including a night in Vegas (!) and had one of my best summers ever.  I learned to waterski and, while I definitely didn’t know it at the time, got an appreciation for hiking, the mountains and the Adirondacks generally, mostly though trips led by Morry.  I’m convinced that I know every blade of grass at camp and, to this day, could walk around it blindfolded.  And, even after all these years, there’s probably not a week that goes by where I’m not reminded of a camp memory or think of something that happened at camp.

When I came back last summer for S’mores Camp with my son Owen, it had been about five years since I’d been back at camp.  My initial reaction was to notice how great everything looked, with all the new and beautiful fields and buildings, renovated bunks and trees that were taller than I’d remembered them.  Sitting at Friday Night Live with Owen, I closed my eyes as Amy closed out the evening by speaking to everyone and leading a round of camp songs.  That’s when I was blown away – it really could have been 1985, that’s how familiar everything felt.

Owen signed up that weekend and my daughter Sasha decided to come on board a few weeks later.  So now I’m fired up to experience my first Echo Lake visiting day as a parent in the summer of 2016!