We are excited to make the return of our monthly blog post “My Camp Echo Lake Journey.”  This week’s “My Camp Echo Lake Journey” comes to us from Corey Frimmer Dockswell.  Corey began her journey in 1982 and spent 17 summers collectively at Camp Echo Lake as both a camper and staff member.  Corey still plays a large role in the camping industry as a Director of Camp Wicosuta in Hebron, New Hampshire.  Please enjoy reading Corey’s Journey below and learn about all that she gained from her time at Echo Lake! 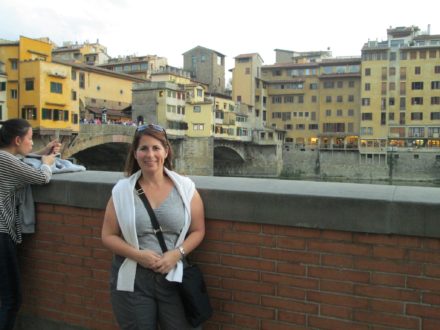 My Echo Lake Journey began in 1982—I was 8 years old and going to sleepaway camp for the first time.  I was excited… my big brother was already a camper and my mother was an alumna.  I remember being asked to stand with other second generation campers on the first or second night of camp.  I was nervous, but mostly very excited to be recognized.

That was the first of many times that I felt a sense of belonging.

I continued as a camper for an additional 9 summers and got my “10 Year Jacket” as a CIT.  It was a goldenrod, nylon jacket with a butterfly collar and metal snaps.  To this day, I am not sure if it was designed as a windbreaker or to be waterproof.  I do know that it remains the ugliest AND coolest jacket that I have ever owned!

Camp is unique in that way… symbols of community are valued no matter what they look like or how they function.

I returned to CEL the following summer as a cabin specialist, then a dance head specialist, followed by three summers of being a Group Leader in the Village, and then wrapped up my seven years on staff as the LIT Director for two summers.

Working at Echo Lake was one of the most meaningful jobs I have ever had.  In each role, I was challenged (for sure!), stretched, worked harder than ever and learned invaluable lessons.  Making a difference and working as part of a large community was amazing—fun, challenging, intense, emotional.  I am hard-pressed to choose my favorite of the roles I played, because each one was so important to and for me at that time.

Working with children in a camp setting is one of the only jobs that offers so much responsibility to relatively young people.  It is also unique in that it creates community and a sense of belonging.

I have so many memories of my time at CEL.  Interestingly enough, I have as many wonderful memories of being on staff as I did from my camper years.  Here are just a few:

The greatest endorsement of my Echo Lake Journey is my current role in life as parent AND camp director.  My husband and I began working as full-time camp professionals many years ago and have been the directors of Camp Wicosuta, in New Hampshire for the past 11 summers.

Each day during the summer, something comes up that reminds me of my Echo Lake experience.  It was formidable.  I learned how to make an impact; I learned to be a leader, a listener and a team player.  I learned humility.  I learned to mess up, how to fix my mistakes, and, hopefully, to learn from them in the future.  There were other lessons learned, too: independence, interdependence, flexibility, cooperation, etc.  The most important lesson of all was that each individual has value.  In today’s age when, as parents, we are tempted to over-parent, and when many of our kids are anxious about yesterday, today, and tomorrow, experiencing the notion of being appreciated for me—imperfections and all—was and is life-changing.  It is a lesson that I pass on to my kids and the children with whom I work.  It is a gift.

*If you were a camper or staff member at Camp Echo Lake and would like to share your Camp Echo Lake Journey please contact Kelly at Kelly@campecholake.com.  We look forward to hearing from you!