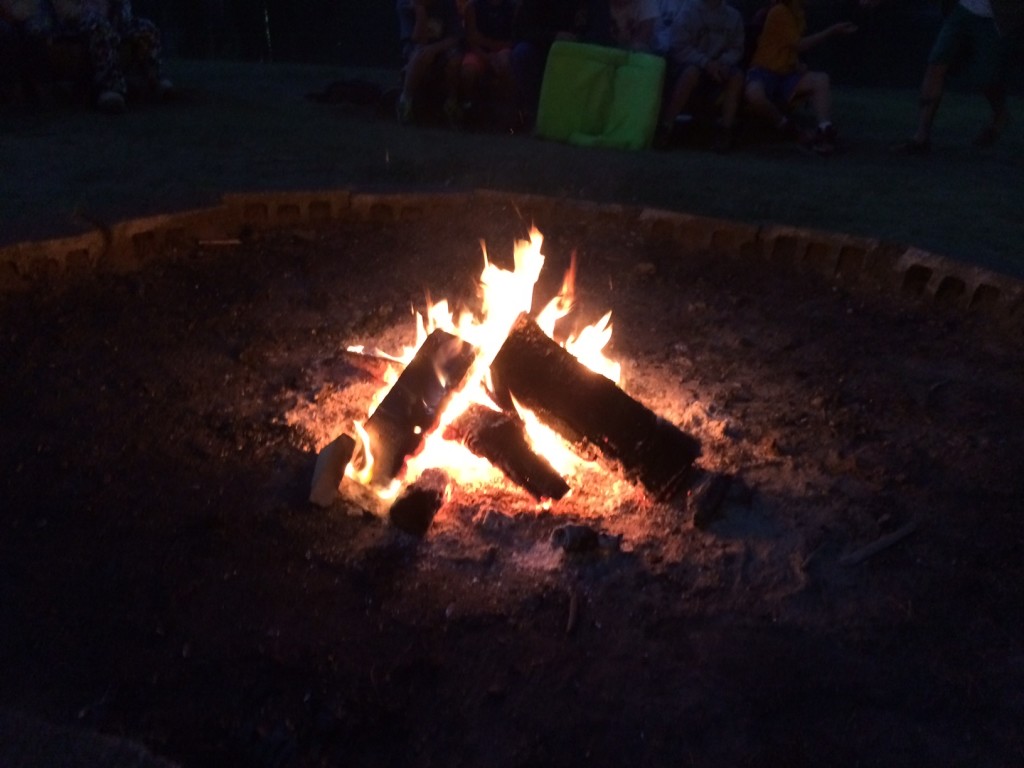 Campfires with Laurie Rinke are looked forward to by all Main Village campers with great enthusiasm for reasons that go well beyond the making of s’mores.  Of course, the treat that is synonymous with campfires is an important part of the experience, but it’s the bonding that takes place, the songs that are sung and the lessons that are learned that truly create memories that will last a lifetime.  And though the campfire experience is somewhat different in Senior Village, there are elements that the campers bring with them from their earlier years.

This week, I had the pleasure of attending campfires in both villages.  Each had their own unique aspects, but what stood out most was the bonding that took place at both, and the fun that was had by all during this timeless tradition.

The campfire that took place in Senior Village was the final evening event for the Lower Village Campers and the campers visiting from Morry’s Camp.  The beauty of this campfire was watching it evolve in a free flowing manner and grow in intensity under the direction of the campers leading each other in song.

Seated in a large circle around the campfire, the first song – “Little Red Wagon” – began at almost a whisper.  Much like the famous Isley Brothers song, “Shout,” “Little Red Wagon” gets louder and more intense with each repeated verse, until reaching a fever pitch that has everyone on their feet and shouting as loudly as they can.  At that moment, the campers from Echo Lake and Morry’s Camp were united as one.

As the night continued, each camp took turns leading the other in song and chants that were embraced by all.  The event was rounded out by the performance of three original songs by Music Head Specialist, Providence David, captivating the entire group as he sang and strummed his acoustic guitar.  Of course, no campfire would be complete without s’mores…the perfect ending to an event that really brought these two groups together as one.

The following night, I experienced my first Main Village campfire with the Frosh and Lower Junior Boys and Girls.  This was the second campfire of the summer for this group, many of whom are first-year campers.  However, at this point in the summer, the bonds are so strong that there is no differentiation between “old” and “new.”  Either way, it was very impressive to see how much all of these young campers had absorbed by being immersed in the Echo Lake experience.

With all of the campers seated around the campfire in their pajamas, Laurie gave them a rundown of how the evening would proceed, in an entertaining and animated way that induced lots of smiles and laughter.

Hands flew into the air as Laurie asked Echo Lake trivia questions.  On a few occasions, the camper didn’t actually have an answer, which speaks volumes about how badly each wanted to participate.  Overall, these young campers knew a great deal of Echo Lake trivia, and were proud of themselves when they answered the questions correctly.

One of the joys of camp is that, at appropriate times, you are not only allowed to shout as loud as you can, you are encouraged to do so.  Laurie told the story of the “Echo Bush” that sits directly across the lake, and then prompted the campers to shout in unison to see if the echo could be heard.  The campers were delighted as their words reverberated across the lake.

With the campers full of energy, Laurie, Kelly Godzac and Patrick McNeece led the group in campfire songs.  Even though many of the campers had only been taught the songs at the first campfire, they all knew every word, and joined in with great enthusiasm.  Just like the Senior Village campfire, “Little Red Wagon” set the tone for the evening.  Going back and forth between the boys and girls, the song built to a crescendo as each group competed to be the loudest.

What struck me most as the songs continued was the familiarity from hearing them the night before.  A lot of things change when you cross over to “The Village,” but hearing the songs on consecutive evenings showed that some things remain the same.  The Villagers carried these songs with them from their younger years, and the passion to sing them never waned.  The enthusiasm exhibited by the older campers was the same as the younger campers.

The Main Village campfire ended with staff-assisted s’mores and a powerful story called The Giving Tree, which was read by Laurie to close the evening.

Like the month of March, campfires with Laurie come in like a lion with a lot of high-energy singing, and out like a lamb with a story, a lesson and a peaceful, contemplative mindset.

From the songs to the s’mores and everything in between, Echo Lake campfires leave a mark that lasts long after the last ember has faded.