This edition of My Camp Echo Lake Journey Monday comes to us from Tifani Buchanan.  Tifani was a Cabin Specialist during the summers of 2015 and 2016. Recently, Tifani was assigned a project in her Creativity Course at The University of Hartford.  She was challenged to write about a time art had impacted her and was instructed to write in the third person.  Tifani immediately thought about an experience she had last summer at Camp Echo Lake which changed her life.  Tifani said “ I  wanted to share the story because I think it’s a great example of how significant the smallest moments can be for people at camp. I would’ve never thought that doing one dance at camp would impact me forever. But it did and it goes to show what camp is truly all about. I hope you enjoy the story!”  You can read Tifani’s story below…

Don’t Be Afraid to Dance in the Spotlight

To say that Tifani is afraid of what people think of her, or afraid of being made a fool of is an understatement. That is, until the day she started working at Camp Echo Lake. In case you’ve never heard of it; Camp Echo Lake is a magical land buried beneath the Pine trees in the beautiful Adirondack mountains in New York. This magical place is filled with the most amazing people you could ever dream of being surrounded by for an entire summer. It is a place where no judgments are allowed. It possesses no negative vibes and instills no fear of being left out or embarrassed. In fact, it is actually required that you leave all negativity at the front gate. The days at Echo Lake are spent soaking up the sun, playing games, being silly and singing ridiculous songs about losing teeth and old folklores. You don’t walk from place to place…you skip, you dance, you chant and somersault. Rainy days are not dark and gloomy, they are filled with card games, dance parties, and jumping in the biggest and muddiest puddles of all time. It was at the gates of Camp Echo Lake that Tifani left her shell at home for the first time in a whole twenty years! How could she possibly refuse to sing along with everybody else, or choose to be the only one not dancing at an all-camp dance party? The answer is: she couldn’t. You see, the difference between Tifani before Camp Echo Lake and Tifani after Camp Echo Lake is that she realized she’s only standing out by choosing not to dance at the parties, or sing silly songs with everyone else.

It was a sunny Friday in the hot month of July when Tifani’s friend Ally approached her and asked her to do the one thing she had always feared the most.

“Hey Tif! So, we’ve got a lip-syncing competition planned for this Monday!” Ally says.

Tifani started to think about what Ally was going to say to her next and thought; oh no.

“Oh my God! That sounds so fun! Everyone is going to love that!” She responds, rather than automatically expressing her fear of what was to come next.

“Yeah! It’s gonna be great! I was wondering if you’d be okay with me signing you up to perform a song with Teague!”

At that point, all of the worst scenarios played in Tifani’s head. But then, she imagined herself dancing on stage in front of 800 of her favorite people, all dressed up in a goofy outfit and looking out to the crowd to see a smile one everyone’s face. How could she say no? No one there was going to judge her or make fun of her. So then she did it. She said yes.

“Seriously?! I’d love to!” Tifani responds with a big smile and excitement not only on her face, but in her heart.

“Great! The kids will love it. It’ll be hilarious and I know you’ll love it just as much. I’ll add you guys to the list!” Ally reassures Tifani.

After Ally walked away, Tifani became overjoyed and pumped to start working on her act with Teague.

Every one of Tifani’s friends knew how much she hated being the center of attention, especially when she’s doing something she isn’t very good at. Although dancing and singing was one of her favorite pastimes and she loved nothing more than to make people laugh and smile, the thought of dancing in front of a crowd before that moment had terrified her beyond extremes. But she knew it’d be worth it and that nothing bad could possibly result from this. Tifani decided to keep it a secret. She wanted to surprise all of her friends and the campers by going on the stage and dancing because she knew that not only would it excite them, but it would shock them in the best way.

Later that day, Tifani and Teague met up and started brainstorming ideas. Together they decided that they would dance to the song “Don’t Stop Believing” by Journey. Over the next few days, they met up and practiced. They choreographed a silly dance with a handstand and lots of jumping around. They planned funky outfits and decided that Tifani would dress up like a boy and Teague would dress like a girl. It was going to be brilliant.

When Monday finally came, Tifani’s excitement had trumped her nerves and she couldn’t wait to perform with Teague. That night, Laurie got on stage and announced the First Annual Counselor Lip-Syncing Contest. Tifani and Teague were the second ones up to perform. They met backstage before their song and put their costumes on.

Juan announced, “Up next is T&T performing Don’t Stop Believing!”

Together, Tifani and Teague ran onto the stage and danced their hearts out with no care in the world. The song was over before Tifani even realized how many people were watching and when she stood up from her final bow to face the crowd, all she could see were smiling faces. She had done it! She had overcome one of her biggest fears and no one was laughing at her, no one was judging; but instead everybody loved it! People loved it so much that for days after, all of Tifani and Teague’s friends continued to tell them how much they loved their dance.

Ever since that starry night spent beneath the pines of Camp Echo Lake dancing on a stage in front of all of her favorite people, Tifani lost her fear of being the center of attention or making a fool of herself. If it weren’t for Echo Lake and the magical feelings it instilled in everyone who crossed the gates, Tifani would still carry her shell for comfort. But after that night, she hasn’t felt afraid, not even in the slightest bit, to be silly and dance in the spotlight with her friends. 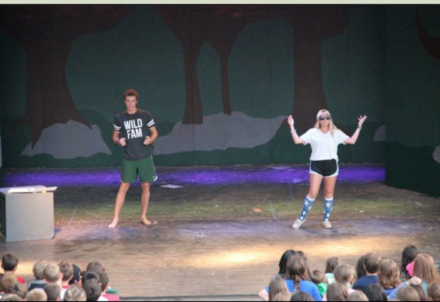