This week’s My Camp Echo Lake Journey Monday comes to us from Nick “Stew” Stoulig.  Nick began his journey at camp back in 1999.  With only a couple gap years in between then and now, Nick has taken on many roles including Cabin Specialist, Group Leader, Tour Director, Program Coordinator and now Program/Operations.  Although Nick does a lot of work “behind the scenes” at camp, you can still find him on stage at the Echo Lake Amphitheater every Friday night hosting Friday Night Live.  Please enjoy reading about Nick’s journey below. 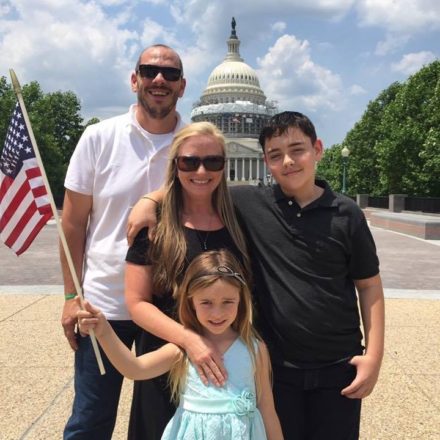 My journey to Camp Echo Lake began all the way back in 1999!  Towards the end of my junior year in college, I began to realize that my time as a student was winding down and I was staring adulthood in the face.  As an education major, I felt the need to explore summer opportunities that centered around children and working with various age groups.  As luck would have it, I found an American Camping Association publication, right outside of one of my classrooms, which listed each and every camp in the United States.  The book was arranged by geographical regions, and knowing I didn’t want to work in the sweltering southern heat, I focused my search on the northeastern camps.  I started applying to a number of summer camp positions.  When I researched Echo Lake, I was struck by the unique role of Cabin Specialist.  No other camp that I had examined had anything like it at the time.  This position was exactly what I was looking for!!  I felt that it was a sign that Echo Lake was the place for me!

My first summer at Echo Lake was mixed with various emotions.  It was the first time that I was away from my family for that length of time and I was nervous about what lie ahead for me.  However, I was elated at the new adventure that I was embarking on.  I remember getting off at Exit 23 on the Northway for the first time and driving through the big front gate.  I immediately felt confident that I had made the right decision, when I saw the campus.  My feelings were bolstered when I got to meet George Stein, who ran the camp with Tony at that time.  He knew me by name, which shocked me, as we had never even spoken until that moment!!!  I have always said that camp has an unseen magic that fills the air, filters through the trees, and infects us all.   The simple act of the director addressing me by name is just one small part of what makes Echo Lake so magical.  The people who work here are truly involved in making camp what we all dream it can be.  What I came to realize from working at Echo Lake, is that WE are the magicians.  We create the magic for those around us.  Camp has allowed me to make so many connections with people from all over the world and it has afforded me opportunities that would have otherwise evaded me.  It has allowed me to grow as a teacher, professional, caregiver, but most of all, as a person.

The summer of 2017 will be my 17th summer at Camp Echo Lake.  I began as a Cabin Specialist in 1999.  I returned as a Group Leader in 2001 and 2003.  The summers that I took off during those years were some of the most difficult summers ever!  Each day, I wished I was at camp, enjoying the experiences, friends, and magic of Echo Lake. In 2004 I began a four year stretch as the Tour Director for camp.  This allowed me to meet prospective campers and parents and do something I truly love; sharing the magic of camp with others.  In 2008, I made the jump to Head Staff as a member of the Program team where I worked until 2012.  In 2013 I began my current role of Program/Operations.  Many campers and staff like to question me on what I do at camp.  I like to simply tell them, “I don’t even know.”  However, I love the role I play at camp as it allows me to do a tremendous amount of work behind the scenes that benefit campers and staff in many ways.  From trip organization, to field work, to equipment ordering, and camp prep, my job allows me to see camp from various angles.

Another great aspect of my time at camp is getting to see my children grow up in such a warm and nurturing environment.  My amazing wife Tara and I made the journey to camp together way back in 1999 when we were just dating.  After our son Ethan was born, he became a part of Echo Lake and has known no other summer experience.  In 2011, our daughter Sophia was born and she quickly became a part of the Echo Lake family.  Ethan will be an Upper Village Boy this summer and Sophia will plug in with the Frosh Girls during the day.  Both of my kids have loved each and every minute of camp because they feel the magic first hand.  Ethan and Sophia routinely make comments regarding camp memories, the staff members that they have had the opportunity to meet, and the experiences that they have be afforded.  Having the opportunity to see camp as an employee and as a parent provides Tara and I with such a unique experience.  When we are not enjoying all that Echo Lake has to offer we are back at home in Hammond, Louisiana which is about an hour north of New Orleans.  I am currently working as a high school counselor, which allows me to have my summers free for Echo Lake.  Camp has become our second home and it will forever be.  We truly live 10 months for 2 and eagerly await the day we get to pack up our home and head north to Warrensburg.

*If you are an Echo Lake alumni camper or staff member and would like to share your Camp Echo Lake journey, please email Kelly@campecholake.com.