This week’s My Camp Echo Lake Journey Monday comes to us from Hannah Coleman.  Hannah was a second generation camper at Echo Lake from 2010 to 2016.  Hannah completely embodies what it means to be a superstar camper and bleeds green and gold.  Hannah just finished up her final summer as an LIT in 2016 and is now heading into her first summer away from The Lake in 7 years! All of us are going to miss her and hope to see her back in the near future! Please read Hannah’s Echo Lake journey below… 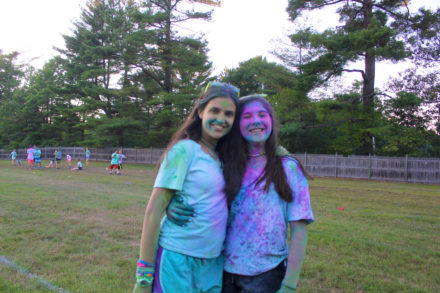 Hannah is pictured here on the left after completing the Camp Echo Lake Color Run for Project Morry.

For me, it was never a question if or where I was going to camp. From a young age I remember listening to my dad and his camp friends talk about summers spent at Echo Lake. They would laugh and recite stories so vividly as though they had only happened a few weeks ago. In addition to my dad’s entertaining camp stories, I watched my sister jump on the bus to camp for five consecutive summers, each time more excited than the last. She would come home with two arms full of friendship bracelets and stories that made her cackle.

When I was ten years old I decided that this was the year I would finally go to Camp Echo Lake rather than day camp. I was both excited and incredibly anxious. I had never been away from home for an extended period of time, and I was worried I would miss my parents. Every time I got nervous, I thought about my sister and my dad, and how their faces lit up whenever the words Echo Lake were said. To this day, I remember walking on the bus with my hair in a ponytail, wearing a tank top and neon pink Soffe shorts, feeling mixed emotions. I sat next to a girl who would later become one of my best friends, and four hours later met a group of girls who changed my life in ways I cannot describe. From the moment I stepped off the bus, I became a part of camp.

Over the next few weeks, I would learn how to make string bracelets, play jacks and Gaga, and the importance of chicken patty day. It was from this summer on that I understood why my dad and sister loved Echo Lake so much. There is no other place like it. No other place where you can make friendships that are so strong, where you can try new activities without being judged, where you sing songs about everything, where you forget about all the stress of school and can just be the truest form of yourself.

After spending seven special summers in Warrensburg, I am truly upset that I am now too old to go back to camp. The hardest part about Echo Lake is finishing your LIT summer and knowing you will not be able to return the following year. However, the values and morals taught at camp will remain with me forever.