Around the Campfire with Laurie: Overcoming the “Camp Cliff” – Parental Reaction is the Key to Camper Success 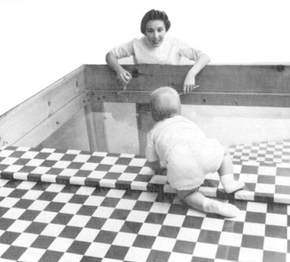 Scientific research and anecdotal experience proves that a parent, care giver, or adults reaction and expression of emotion to a child who is attempting something for the first time (like crossing the visual cliff) or does something that elicits a possible emotion (like a minor trip and fall), absolutely impacts, influences, and in some cases, dictates the child’s reaction and the child’s behavior. Powerful stuff, right?! Maybe the Visual Cliff experiment has stuck with me so much because I have seen it born out hundreds and thousands of times in relation to camp and my interactions with children. Whether we are talking about parent interactions with their children, staff interactions with their campers, or my interactions with children / campers, an adults emotional reaction to, and expression about, a child trying something for the first time or having an experience that elicits an emotion for a child, impacts and influences a child’s emotions and behavior tremendously.

At camp when a staff person can see that a child is struggling with an emotion about trying something, such as being nervous to swim in the lake or anxiety to try the ropes course, or even hesitation to play in an activity that they do not feel confident in, the staff person can have a definitive impact on that child. A staff person acknowledging the child’s emotion (saying something like, “I can see that you are nervous about swimming in the lake”), connecting with them in such a way that lets the child feel supported (saying something like, “I am going to be with you to figure this out and camp would never let you do anything that wasn’t safe”), and then confidently giving them manageable steps to try to move forward (saying something like, “instead of jumping right in the lake, let’s sit on the dock and dip our toes in first”), this allows the camper to borrow the confidence of the staff person and take steps forward to do what makes them nervous. It is one of the best things that happen at camp, that when campers can borrow confidence from reassuring, compassionate, cool counselors that enables them to take a risk even when nervous. This is a daily occurrence at camp and the fact that our campers are surrounded by child focused, developmentally appropriate, super fun young adults helps campers try new things at camp.

One of the things that I get to do during the non-summer months is visit families of first-time campers or campers who may be a little nervous about returning to camp. Families often share that the visit helps the camper get more excited and less nervous for camp and allows the parents to get more excited and less nervous for camp too. I wish I could tell you that I had some magic potion or wand that I brought to these visits that created more excitement and diminished nerves, but the truth is, I don’t. What I do bring to these visits is my own personal experience of having been a nervous camper, my thirty four summers at camp, and my experience with parents and children both in and out of camp that affords me the knowledge that camp is an incredibly positive experience for kids and the confidence that we can help the camper and parents adjust successfully to camp. My positivity, excitement, compassion, and confidence in camp and the camp experience can be contagious. If I thought (or ever do think in 1% of the cases) that camp was not the right fit for a particular camper or family, I would be very upfront and honest about that. That said, I know with my entire mind, body, and soul that Echo Lake Campers, given the confidence from their staff, from me, and from their parents can and will be successful at camp. I actually think that that is the “magic” that I bring to the visit. I reflect to the campers and parents, through my joy, encouragement, and happiness, that camp is going to be great, that I am going to be there for them every step of the way, and that they can do this. It’s a little like Glinda the Good witch in The Wizard of Oz when she says to Dorothy, “You’ve always had the power, my dear. You just had to learn it for yourself.” If I can help campers and parents learn that they have the power in them to do this, by letting them borrow my confidence, then I will keep “waving my wand” for anyone that wants it.

Going back to the Visual Cliff experiment for a minute, perhaps most directly as well, I will tell every parent out there that your child’s ability to go away to camp, adjust to camp, thrive and be happy at camp, and want to return summer after summer, is most directly impacted and influenced by how they experience and interpret YOUR reaction to them going away to camp. Imagine that your camper is on one side of the visual cliff and you are on the other, just like a crawling infant, if a camper sees their parent fearful, anxious, or disinterested about camp, they will be fearful, anxious or disinterested too, but if a camper sees their parent joyful, encouraging, and happy about camp, they will be joyful, more confident, and happy too. A campers levels of anxiety and excitement about going to camp, especially for a child’s first summer, but for each summer they are away, is most strongly impacted and influenced by their parents reaction and emotional expression about camp. Every camper feels some level of excitement and some level of nerves before camp (or anything like the first day of school or their first day at a new activity) begins. It is perfectly normal to experience both feelings actually. But, when a camper is standing on one side of the camp “visual cliff” and looks to the most important people in their lives (their parent or parents), standing on the other side of that camp cliff, what they see from their parent is going to impact and influence them more than anything else.

Now, parents are people too, with their own emotions and feelings – both excitement and nerves – about their child(ren) going away to camp. Parents can feel free to reach out to us at camp anytime if you find yourself standing on one side of a camp cliff and needing us to let you borrow our reaction or emotional expression. We can support you too. But, the most important thing you can do for your child when it comes to them increasing their excitement, decreasing their nerves, and feeling the most confident about going to camp, is expressing YOUR confidence in camp and in them that camp will be great, that camp will support them when moments are tough, and that they have the power in themselves to have an amazing summer at camp. Remember that when it comes to a campers success at camp (both before and during), the staff will help campers borrow their confidence, I will help campers and parents borrow my confidence, but the most crucial component to camper success and overcoming the “Camp Cliff” is their parents reaction to camp. And similar to what Glinda the Good Witch said to Dorothy in the Wizard of Oz, you’ve always had the power, Parents! You just had to learn it for yourself and share that with your campers as you are key to your campers success in overcoming the camp cliff! We will have an outstanding summer and trust me your camper(s) will thank you for the wonderful gift of camp you are giving to them! Summer 2019 can’t come soon enough.

Share This: Posted in Around the Campfire with Laurie, News and Announcements