Throughout the weeks leading up to camp, we would like to introduce you to some of summer 2016 Group Leaders and Head Specialists.  These are people who play a very important role on camp, as they lead our groups and activity areas to having a successful summer!  This week’s “CEL Staff Spotlight” is on Mike Greenwald.  Mike began his journey at Echo Lake as an Upper Junior Boy.  He went on to complete the full camper program as an LIT and has since been on staff for the past 4 summers.  He is excited to take on the role of a Group Leader this summer!  You can learn more about Mike below: 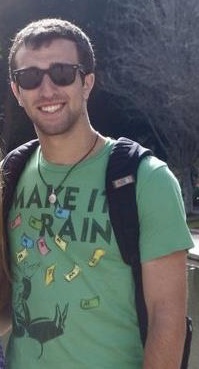 What year is this for you at camp?

What brought you to camp?

Until I found Echo Lake, I attended an 8-week day camp not too far from my hometown. I had a lot of fun, especially during the mid-summer “sleep-away week” when day campers were given the opportunity to stay at camp overnight. In 4th grade a good friend of mine from school suggested that I come check out his sleep away camp, Camp Echo Lake, in the Adirondacks. I think I knew CEL was the right place for me the very moment that I arrived for my tour: the program was perfectly well-rounded, the staff were friendly, and everyone (including my friend, who was already a camper) was having an awesome experience. Apart from one summer post-LIT, I think I’ve spent every summer at Echo Lake since then!

Where are you originally from?

I was born and raised in Woodcliff Lake, New Jersey.

Where do you live now?

Right now, I live in Middletown, Connecticut at Wesleyan University. All that is going to change soon after I graduate, I’m planning to move to Stamford, Connecticut in the fall!

What do you do in the off-season?

I’ve spent the past four years of the off-season working towards graduating from Wesleyan University—majoring in Social Studies and minoring in Quantitative Data Analysis—and making time for plenty of outdoor adventures. Last year I was even able to make a trip to Nepal after camp, where I conducted field research for my school. Now that I’m back in the US, I’m a big fan of ultimate frisbee, backcountry skiing, and indoor/outdoor climbing, and I have a great group of friends to trek around with who share my enthusiasm for stepping out of the “comfort zone.” This past year I’ve really gotten into distance running, and after a few months of training have completed a handful of half marathons and hope to compete in a full marathon in the fall.

What is your background experience working with children?

At Echo Lake, I’ve spent three summers working with Juniors and one summer working with Inters. Over the past five winters, I’ve also coached skiing at Vermont’s own Stratton Mountain Resort, teaching freestyle, moguls, and backcountry skiing to a group 13-16-year-old students every weekend from Thanksgiving until the snow melts!

What are the goals for your campers for the summer of 2016?

My goal for my campers in the summer of 2016 is that everyone tries something entirely new. Camp was the place where I was introduced to a number of activities that I never had the opportunity to try out at home, like lacrosse and climbing, that quickly became a big part of my life year-round. Every summer at camp I hope to try something totally new, and I hope that my campers will do the same. It might be a game, an instrument, a type of food, or a trek trip; as long as we can create an environment where the campers actively seek out opportunities to have a novel experience and step out of their “comfort zone,” I’d say we’re reaching that goal. After all, being able to try new things in a low-pressure, highly-supportive environment is the one of the best things about being at camp.

At the end of the summer what do you hope your campers will say about their summer?

At the end of the summer, I hope that my campers will be able to look back and see just how much they have grown as individuals over the course of two months and say, “I’m glad I unplugged for camp.” In a world where we, both children and adults, are constantly being bombarded by technology and social media expectations, places like Echo Lake do a terrific job of fostering an environment where anyone with the right attitude can feel good about themselves. I hope that we will succeed in helping our campers to reflect upon the fact that happiness is not measured with “likes” and “shares,” but with effort and kindness. The outdoor, active environment of CEL is the perfect setting to realize that unplugging from a smart phone and truly living in the moment is an invaluable experience.

What are you looking forward to the most this summer?

My absolute, number one favorite thing at camp is Apache Relay, and it’s definitely at the top of my list of things I’m looking forward to this summer. Seeing the whole camp (ok, Main Village and then Senior Village), both campers and staff, basically all participate in a single, unified relay race is totally thrilling. While also just tons of fun, I think that the relay itself really carries the values of teamwork and sportsmanship that are so central to the CEL experience.