This week’s My Camp Echo Lake Journey Monday article comes to us from Nichole (Chole) Barrett.  Chole worked at camp for 5 summers from 2004-2008.  During her time at CEL, Chole was a Group Leader and Junior Girls Head Counselor.  She currently resides in Buffalo, NY where she is studying for her PhD.  Please enjoy her story… 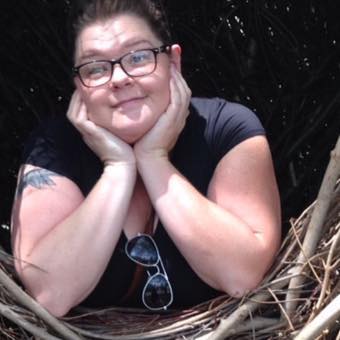 I remember the moment I decided to apply to work at CEL. I was 22 years old. I was ready to graduate from college, but I wasn’t ready to go home. I wanted to spend my summer somewhere other than my mom’s living room. I was about to graduate with a degree in theatre, so when I discovered that CEL had an opening for a theatre specialist, I was excited. I filled out the online application and it seemed that almost immediately I had an email from Laurie. As we talked on the phone I had a feeling that this CEL place was pretty special. About half-way through the interview, I also realized that I was not being interviewed to be a theatre specialist. I learned very quickly that I was being interviewed for something called a Group Leader. I had no idea what a Group Leader was, but I did know that I wanted to be a part of the CEL family.

When I pulled up to Echo Lake in the summer of 2004, I had no idea that I was about to experience something life changing. Before Echo Lake I had never been to camp before and I didn’t have a whole lot of experience with children. When I found out that I would be working within Junior Camp, I was terrified. How was I supposed to connect to children that were so young? What happened was incredible. I spent that first summer running around and laughing with a fantastic group of 9yr old girls. They taught me how to be a kid again. They taught me how to let go of all the pressures of life and just have fun. We had our ups and downs, but I learned more from those 9yr old girls about life than I had during my four years of undergrad. For the next two years I returned to Echo Lake as a Junior Camp Group Leader. I had small groups and I had large groups (if you want to get technical about it, I had the largest group on Girls’ Camp the summer of 2006), but each summer I walked away with a changed heart and an invigorated spirit.

I didn’t think that camp could get any better. Then a single phone call changed everything. As I looked down at my phone and saw Tony Stein’s name, my heart leaped out of my chest. What on earth could he want? The conversation that ensued would warm my soul to the very core. Tony explained that camp was going to be restructured and he had selected me to lead Junior Girls Camp as a Head Counselor. It was like a dream come true! I would get to spend my summer playing with ALL of the junior girls! I would get to spend my summer developing other counselors! I would get to run morning line-up! I would get to carry a walkie-talkie! I graciously accepted Tony’s offer and the rest is history. I spent the next two years being inspired and awed by every member of Girls’ Camp.

I knew when I had to say goodbye to CEL after that fifth summer that I would never forget the time I spent there. I knew that I was different, but I wasn’t exactly sure how. It wasn’t until after graduate school that I realized that those five summers were preparing me for a career in education. It’s been 8 years since I’ve been at The Lake, but I think and talk about camp as if I was there yesterday. Whether it’s because I’m hunting down the incredible camp friends on Facebook, or using my experiences as an example in one of my doctoral classes, camp is, and always will be, a part who I am and I wouldn’t have it any other way.