Lemons to Lemonade with Matt LeMoine: Running into the New Year 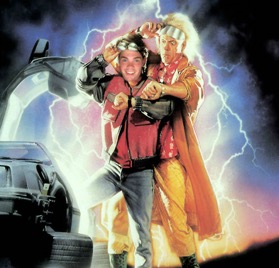 Let me begin by offering a disclaimer, I love time travel! Whether it is the exploits of Doctor Who, the adventures of Marty McFly and Dr. Emmett Brown, or any superhero that has been written with time and space manipulation abilities… I love it all!

This year I felt more like a time-traveller than ever before as some Echo Lake Alumni and I decided that we would not just let the new year come and go with a countdown and the dropping of a ball in Times Square, but rather we decided to literally RUN into the new year at a New York Road Runners event in Central Park! The race, which I highly recommend to anyone, began at the stroke of midnight after a countdown from 10 and an impressive display of fireworks next to the reservoir. There were thousands of people who had the same idea as us, but the notion of “Running into the New Year” stuck with the time-traveller inside me.

So, I guess I was not the master of time like the characters you may have read about in comic books or in H.G Well’s novels, but I was the master of my own time. Instead of allowing the New Year to pass me by like I have in the past, I was running head first toward it! I was, in my estimation, a time-traveller, moving into the future at my own pace and with full awareness of where I was going. In fairness, as Stephen Hawking notes, “We are all time-travellers, journeying together into the future,” but while we are all travelling through time, very few of us feel in control of it.

At camp, however, I feel we have mastered the manipulation of time! We can stretch a day and all the fun it has in store, but we can also make a week fly by with the anticipation of each coming special event. When we are in the moment, a single summer can last a lifetime and the months between summers feel like an eternity, but when I think back to my first summer 7 years ago, it seems like only a moment has passed. While we are always moving in one direction through time together, at Echo Lake time always feels deliberate and important.

Understanding time and being able to maximize your time is not just a skill we are able to implore at camp. As we have now crossed over into the New Year, it officially feels more like we are moving toward Summer 2017 instead of away from Summer 2016. While taking control of time can be difficult without a TARDIS or a 1985 DeLorean DMC-12, you can be deliberate with your time between now June. Take the time to prepare yourself for the end of the school year, and get ready for another amazing summer at camp.

Personally, having run into the New Year, I intend to continue running through the rest of the year. Rather than having deadlines creep up on me, I will work towards them with intention and control. Instead of setting goals and pushing them off to the next year, I will take the time now to work toward them and achieve them before the year is out. While I may not be able to control the sun rising and setting, or the amount of time I have in a day, I can control what I do with the time that I have. As you move through the next 5 months be conscious of your own time, we are all incredibly excited for camp to start but that does not mean we should wish away the time between now and then. Take your time, be present, and come June, you will be ready to enjoy every second that Camp has to offer!!

Share This: Posted in Lemons to Lemonade with Matt LeMoine