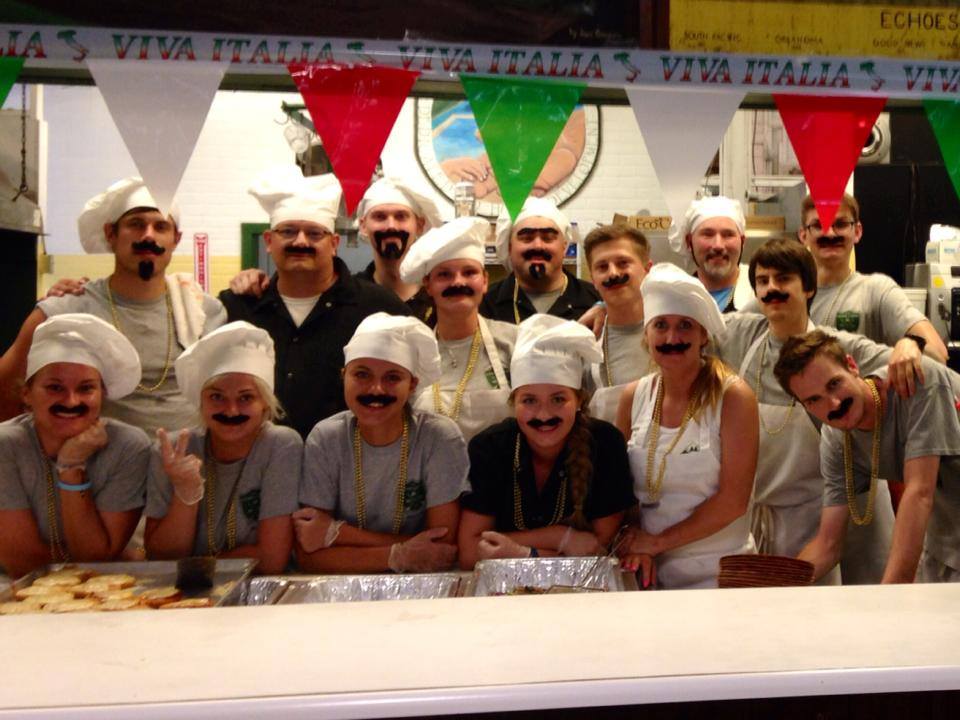 After each summer, evaluations are made to see what elements can be added to make the Camp Echo Lake experience even better the following year.  This past winter, Missy Baer (Dining Hall Manager), came up with a creative idea to “spice” things up for the campers in the dining hall.  Her idea was to create a weekly theme dinner to add some excitement to the two-week menu rotation.

The first theme dinner of the summer was “Little Italy.”  To go along with the evening’s Italian fare, everyone was treated to Italian music and decorations, and the kitchen staff all wore chef hats and thick, dark mustaches (even the girls!).

All of the kitchen staff members fully embraced their roles on Pirate Night, and had a great time together.  As the kids were entering the dining hall, members of the kitchen staff were dueling with blow-up swords as pirate music played in the background.  The campers all loved the theme, the energy in the room and even the breaded haddock, which was served for the first time this summer.

On Rodeo Night, the kitchen staff wore cowboy hats, badges and bandanas, while country music played in the background.  And during this week’s Mexican Fiesta theme, they all wore sombreros for “Ocho Ocho,” which has become a camp favorite meal.

Now an annual Echo Lake tradition, “Ocho Ocho,” began approximately five years ago (on 8/8).  The campers and staff all get the chance to build their own burritos (similar to dining at Chipotle).  This year, “Ocho Ocho” was built into Mexican Fiesta Night, which also featured costumes, decorations and Mexican music.

The final two themes of the summer will be Chinatown and Echo Lakealopolis (Mediterranean), sandwiched around our annual Carnival (the one day each summer where the kids go crazy for curly fries!).

Theme dinner nights have added an element of excitement to the Echo Lake dining experience.  The campers feed off of the energy of the kitchen staff, who are a big part of the camp even though they spend much of their day behind the scenes.

Our kitchen staff has deep roots within the Echo Lake community.  A number of the local staff members work at the Echo Lake Lodge during the wedding season that occurs between summers.  Many of the campers know these staff members by name, and have built a rapport with them through the years.

In addition to our local staff members, the rest of the staff is comprised of college students from Poland, Hungry and the Czech Republic.  Approximately half of them have been here for more than one summer.  Although they work in the kitchen, they have come to camp for the same reasons as counselors and activity specialists from overseas.  Theme dinners give them the chance to interact in a fun way with the campers, so they have fully embraced the weekly opportunity to take center stage.

Theme dinner nights have become something that the campers and staff all look forward to each week, and it has given the kitchen staff the opportunity to be a bigger part of camp.  Overall, the idea that Missy Baer came up with over the winter has been a tremendous success this summer!